Tintoretto and the Scuola of St Mark 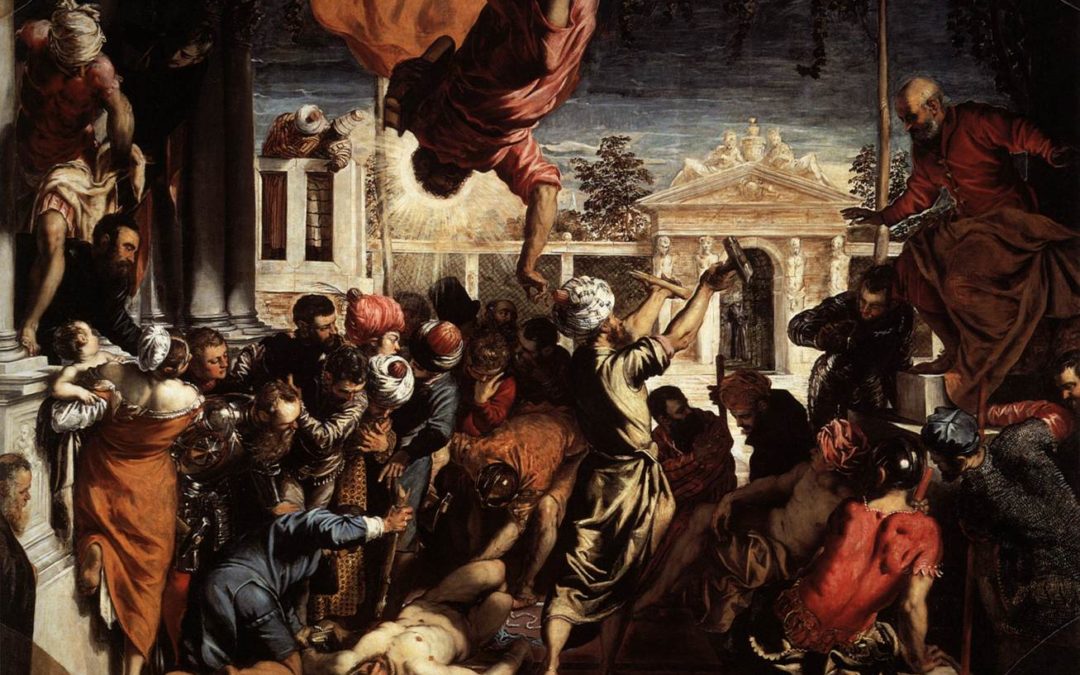 Two paintings by Tintoretto made for Scuola Grande di San Marco deserve some particular attention: St Mark Frees a Slave aka The Miracle of the Slave and The Theft of the Body of St Mark aka St Mark’s Body Brought to Venice. A third canvas, which used to complete the cycle — Finding of the body of St Mark —, is now kept at Pinacoteca of Brera in Milan.

The Miracle of the Slave is the first painting commissioned by the brethren of Scuola of St Mark for their chapter room. It was painted by Tintoretto between 1547 and 1548. According to the Golden Legend by Jacopo da Varagine a servant had dared visiting St Mark’ s body without his master’s permission and was condemned by his master to be blinded and have his legs snapped but a miraculous intervention of the saint, painted in a daring quick back-lit fashion while dashes in from above, rescues him making the instruments of torture unusable.

Tintoretto paints the theme with an exceptional theatrical value, building up a scene that is, at the same time, a theatrical representation through strong light and shadow contrasts that accentuate the frenzied gestures as well as dynamism and twisted poses of the characters whose highly plastic representation echoes with the influence of both Michelangelo and Raffaello as well as of Giulio Romano. The unprecedented dramatic power as well as the revolutionary expressive strength made the contemporaries so disconcerted that the brethren of the Scuola initially thought of rejecting the canvas.

St Mark’s Body Brought to Venice, also inspired by the Golden Legend and made between 1562 and 1566, shows some devotees, who had managed to seize the relics of the saint (which were in Alexandria of Egypt), that are about to be burnt at the stake. The scene’ s setting is provided with a diagonal having a dizzy perspective as well as with a strong effect of illusion according to the fashion typical of the artist. The space looks fantastic with architectures “beached” under a dark sky that foretells the providential storm that will extinguish the fire and cause the stampede that will allow the recovery of St Mark’ s body. The square reminds of Piazzetta Marciana and is closed at the bottom by a building that resembles the Torre dell’ Orologio (Clock Tower).

Once we draw a comparison with the previous canvas, we can notice the stylistic evolution the painter has gone through: he waters down the plasticity typical of his first production and accentuates the light and shadow effect, sacrificing part of the initial rich chromatic variety. In both paintings we can spot the same bearded character that appears also in the nearby paintings: the man is Tommaso Rangone, physician and scholar as well as Warden of Scuola di San Marco (St Mark’ s Scuola). He had himself portrayed in the large canvases and triggered the brethren’ s disapproval for his excessive attention-seeking.