The Wedding at Cana by Jacopo Tintoretto 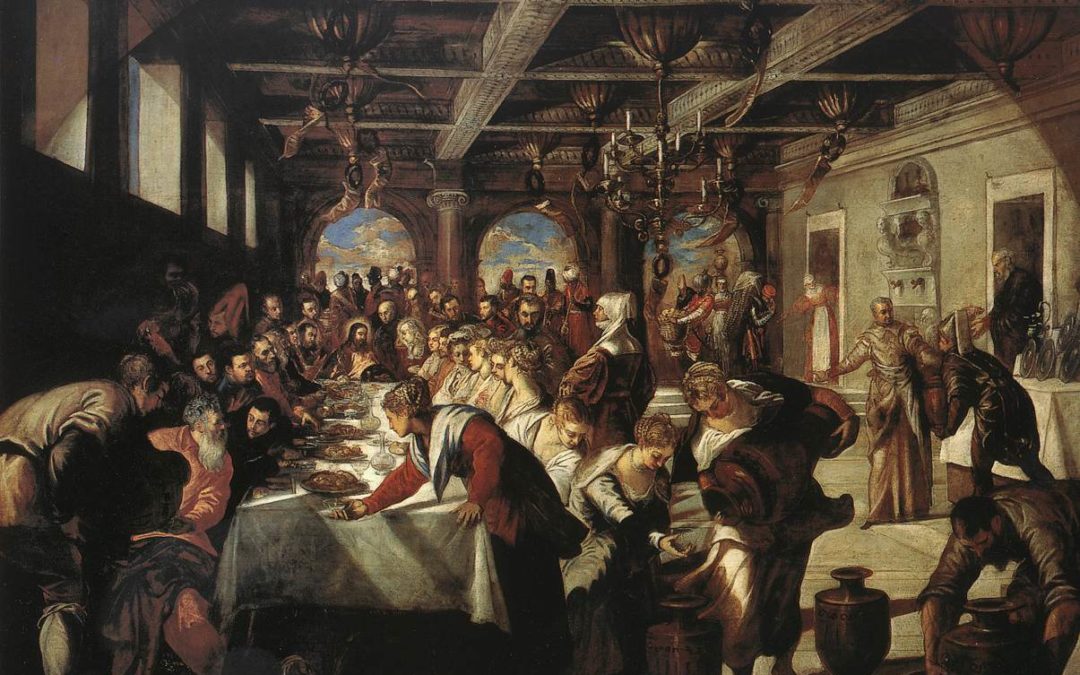 The huge canvass The Wedding at Cana by Jacopo Tintoretto dominates the right-side wall (as viewed from the apse). It was made and dated by the master in 1561. Tintoretto painted this work at the beginning of his artistic mature age and just some years before he started working on the decorative enterprise at Scuola Grande of San Rocco, work which will install him as a supreme master.

Following a specific request from the friars running the Crociferi compound, the artist is competing with Veronese regarding the elaborate architectonic partition of the room, which is lavishly furnished and is topped by a rich panelled ceiling ending with monumental arches, typically following the Veronese’s style, opening on an intense light-blue sky crossed by many clouds.

The tablemates, unlike the Veronese’s suppers, are here wearing way simpler and more commonplace clothes, resembling the ones worn by the Venetian middle-classes. The daring diagonal perspective of the long table is typical of the painter like the light and shade contrasts and the virtuoso rendering of the light coming from several sources. Jesus is place at the very end of the table, which is wider than longer but looks narrower because of an optical illusion.

The Virgin Mary is leaning over him while interceding for the newly-weds. The cups are empty because the artist is showing the moment that comes right before the miracle. The lively choral scene is celebrating the sanctity of marriage but it anticipates the Eucharist at the very same time, as it was perfectly suitable for a monastic refectory.

A recent critical review of the painting points at the character with a beard, wearing an orange clothing and positioned in a close-up on the left as a self-portrait depicting Tintoretto himself. Therefore, it is not pure chance that the artist’s signature is placed right close to the cloak. Furthermore, the character placed between Jesus and the Virgin Mary would be the commissioner of the canvass. In the canvass, we can see portrayed many people either famous in town or close to the painter.

Among them, we can mention his favourite daughter Marietta, who is pictured in full light on the right side of the table, near the groom whose features recall the Spanish King Philip II, for whom the young girl had allegedly fallen in love.

We would like to mention a curious tradition still kept nowadays: every year the Feast of Salute is celebrated and a temporary bridge is built crossing the Grand Canal near Campo del Tragheto and close to Santa Maria del Giglio.