The Pietà by Titian 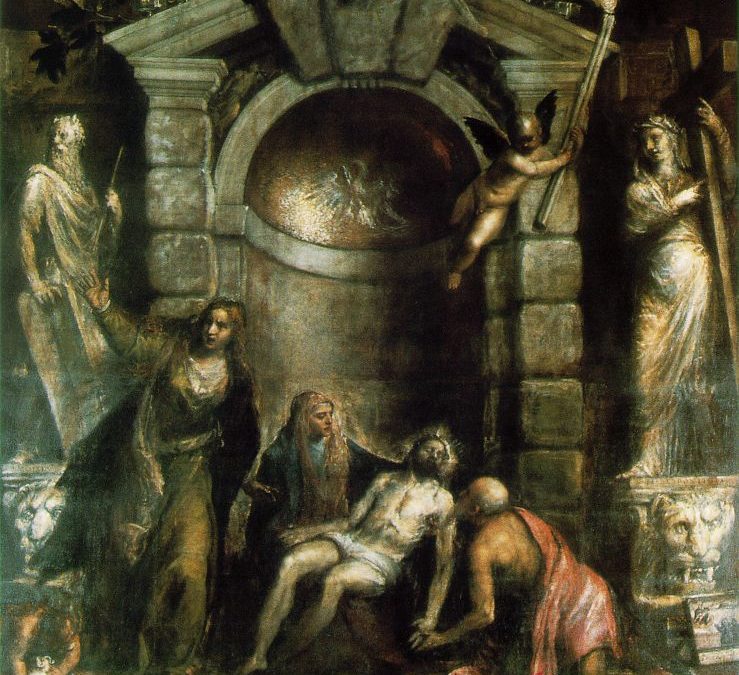 As a majestic and ‘in crescendo’ ending, we stop for a while to examine the Pietà by Titian which is a document of exceptional historical and artistic not to mention human interest. This dramatic painting, the artist was working to in 1576 — the year of his death —, was destined for his tomb. It was left unfinished and was finished off in some detail by Jacopo Palma il Giovane. It was never placed in the Frari Church, where the painter had asked to be buried, but was left in his workshop and then placed in the church of St Angelo from which it was acquired for the Gallery. True spiritual testament of the artist, the painting focuses on the themes of death, sacrifice, and resurrection, to which various symbolic elements allude. 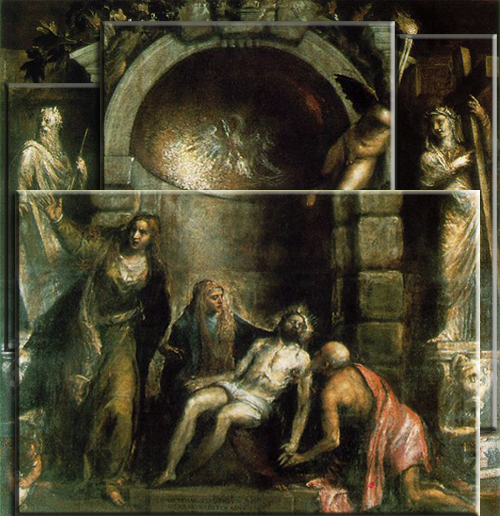 Such as the statues of “Moses” and the “Helles pontine Sibyl”: one is the pre-figuration of Christ , the other a prophetess who had predicted the death of Jesus on the cross and his resurrection. Furthermore also the pelican that pierces its chest to feed its little ones with its blood, picture which is placed at the base of the apse, is an allegory of Christ’ s sacrifice.

Besides a shocked Magdalene and a worn out Virgin Mary, who is holding up the livid body of Jesus, we can notice an elderly as well as bold and bearded man reverently kneeling in the presence of the Son of God: the man is Nicodemus and it is said that Titian portrayed himself in Nicodemus’ s features putting himself into the sacred event almost as if he was asking for the forgiveness of his sins. The scene is immersed into a ghostly night atmosphere lit by a poor flickering light that accentuates its drama.

The painting technique belongs to the late Titian’ s production characterised by quick brushstrokes having stains of colour that accentuate the fading-away forms and contours that seem almost eroded by vibrant passages of light and shadow. In this last phase Titian’ s ‘tonalism’, developed by him throughout his entire career, reaches unprecedented expressive peaks that anticipate some outcomes belonging to modern painting.