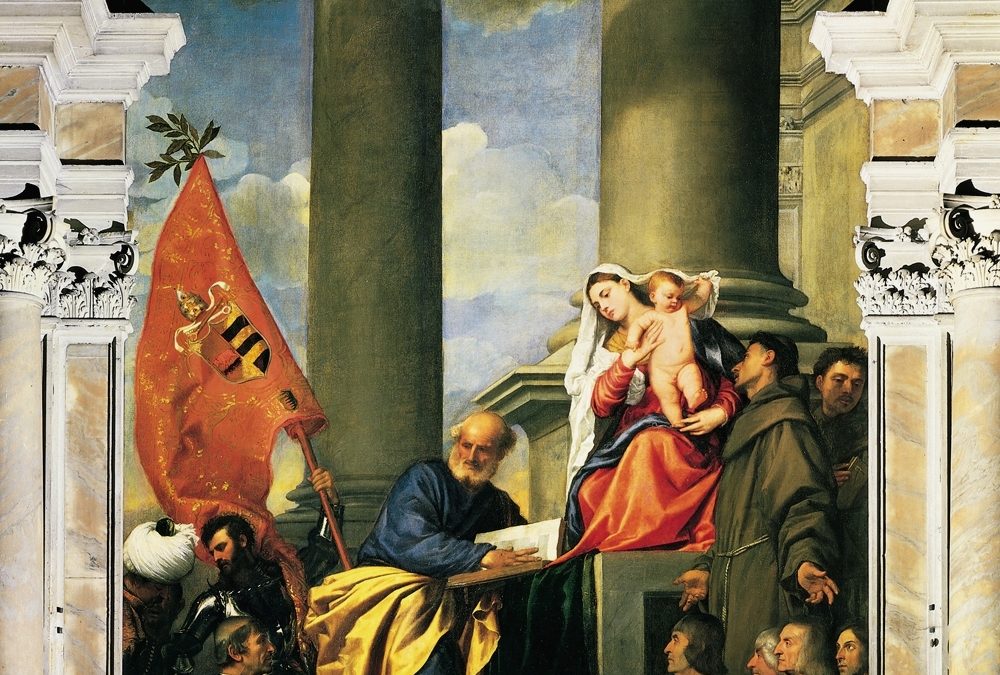 A superb work by Titian, this altarpiece is set on the altar of the Immaculate Conception along the left nave. It was granted to the ‘Scuola’ of the same name. The work was conceived between 1519 and 1526 both as a celebration of the glories of Jacopo Pesaro’s family, who became bishop of Pafo and was the architect of the victory on the Turks during the battle of Santa Maura in 1502, and as a memento to the Dogma of the Immaculate Conception. Again Titian manages to surprise us putting the Virgin Mary on the right side of the painting. He places the Virgin Mary on a tall pedestal instead of putting her right at the centre, as it was customary, with saints and benefactors on both sides. St Frances and St Anthony, placed on the right, are introducing to the Virgin some members of the Pesaro family.

On the left side St Peter is interceding on behalf of Jacopo Pesaro who is kneeling at the foot of the steps with two Turkish prisoners, one of them sporting a turban, next to him. Another saint (maybe St George or St Theodor or St Maurice) wearing a bright armour is triumphantly holding the family’s banner topped by the papal crest. Two gigantic columns, placed on huge bases, are behind the Virgin Mary holding Baby Jesus and disappear high above among the clouds. They contribute to emphasize the scenic effect and the diagonal composition as well as the sumptuous chromatic and lights ensemble in which the reds of the banner and the senatorial toga belonging to Francesco Pesaro stand out as well as the yellow gold of St Peter’s cloak, which is an absolute novelty by the painter.

The two huge columns are not just ornamental but they are also a clear reference to not only some liturgical texts but also to the symbolical prerogatives of the Immaculate, whose devotion had been strongly propagated by the Franciscans. The latter are here represented by their foremost Saints: Frances and Anthony. The extraordinary importance of the painting, besides being a masterpiece from an artistic point of view, is also underlined by the presence of complex symbolic messages as well as political, religious and dynastic ones together with a unique iconographic concentration.