The Martyrdom of Saint Lawrence by Titian 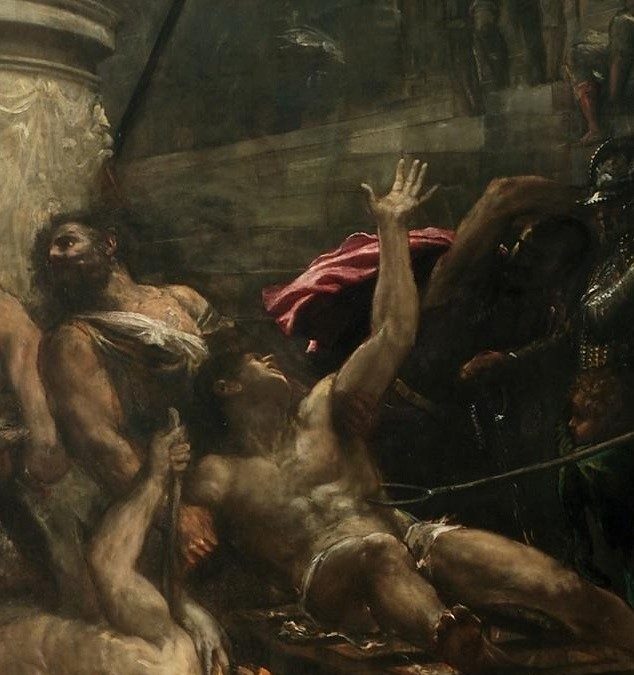 Inside Santa Maria Assunta church, known as the Chiesa dei Gesuiti, in the quiet Cannaregio neighborhood, hangs The Martyrdom of Saint Lawrence, a sixteenth-century masterpiece painted by Titian in his prime.

The painting is located in the first chapel on the left upon entering this enormous Latin-cross plan eighteenth-century church. Titian created several versions of the painting and worked on it for a full decade, from 1547 or 1548 to 1558.

The painting is one of the best and most spectacular examples of the nocturnal in Veneto art history. It achieves dramatic tension through the almost experimental use of the subject matter and the intense chromatic contrast and chiaroscuro—a result of the innovative spirit that would influence Titian’s colleague and rival Tintoretto.

The scene unfolds on a very dark night. There is no single focal point, visually speaking; instead, the flames dancing upward from underneath the gridiron where the saint is being burned cast light on various areas of the painting, as do the torches, faint moonlight, and beams of divine light shooting from the sky.

The backdrop—the buildings, the temple columns, the statue of Vesta holding a figure of Victoria in her hand—reference classical and ancient Rome. Saint Lawrence was indeed a Christian martyr who died opposing paganism in third-century Rome, during the era of Emperor Valerian. His story was particularly popular in sixteenth-century Venice during the era of the Council of Trent (1545) and the pushback against Lutherans.

Titian may have absorbed these references to the classical world directly on his trip to Rome in 1546. At that time he met Michelangelo and admired his work, and that work does seem to have influenced the depiction of the two persecutors in this image. Also, in Venice, Titian would have had the opportunity to see the sculpture Gladiator in the Act of Falling at the Doge’s Palace. This was a Roman replica of a Greek original (part of Domenico Grimani’s collection). Titian seems to have taken inspiration for the body of Saint Lawrence from it.

This combination of classical references, innovative composition, and strong dramatic flavor make this a masterful example of the early Mannerism that would wield influence for centuries.