The Altarpiece by Giovanni Bellini 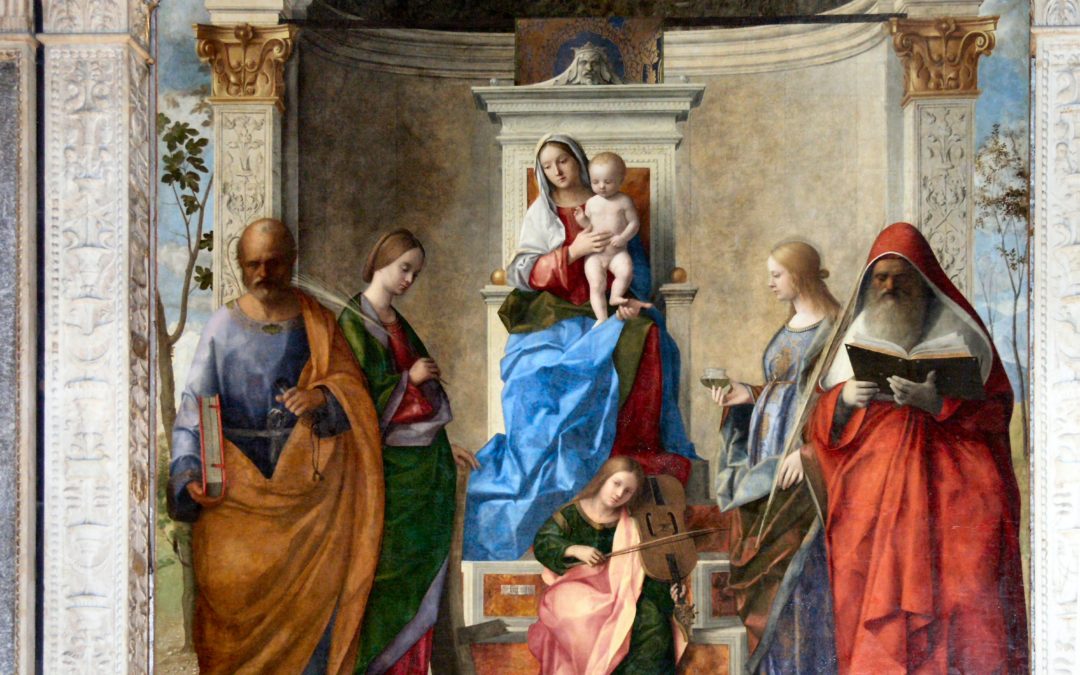 The said altarpiece is set on the high altar dedicated to St Jerome along the left nave. It is signed and dated 1505.

It was commissioned to the painter, who had reached the peak of his career, by the Benedictine nuns who were the owners of both the church and the convent. During the 90s of the XV century, Bellini had been busy with the canvasses, which were later lost, for the Hall of the Maggior Consiglio at Palazzo Ducale. Such a prestigious task had forced him to give up painting sacred pictures for a while. The commission at St Zachary’s is therefore a chance for the painter’s great comeback. The atmosphere of meditation and mysterious wait created in the onlooker by this absolute masterpiece helps him to pause and is perfectly summarised by Henry James. He was an illustrious visitor of Venice and a strong admirer of the city. He wrote in his work ‘Italian Hours’: ‘It shows such a sweetness as well as a strongly harmonizing serenity that even the most demanding expert cannot refrain from kneeling in front of it.

In the painting you can see the Blessed Virgin Mary enthroned and holding Baby Jesus. She is sitting among four saints. Peter and Catherine on the left, Lucia and Jerome on the right plus an angel playing a musical instrument. The artist manages to perfectly combine the virtual space of the scene described in the picture with the real one of the church. In fact he reproduces into the panted architecture the elements of the altar by Codussi. In the picture we can see a chapel, partially open on the sides, topped by a half-dome showing a mosaic decorated with branches of acanthus on a golden background, which is a magnificent homage to the Byzantine tradition. As usual Bellini starts a subtle dialogue with nature, which peeps on the left and on the right of the open compartment. But nature, above all, stands out in the play of light that penetrates everywhere, caresses the ostrich egg hanging from the ceiling, draws a warm golden glow from the golden mosaic and gently modulates the faces of the saints blurring the boundaries and reaching an almost Giorgione-like atmospheric softness. By the way, the fruitful dialogue between the old Bellini and the young master, who painted the Castelfranco altarpiece as well as the Tempest and the Three Philosophers within a few years, is self-evident here. We can already speak of ‘tonalism’, with the colour vibrating in accordance with the intensity of the light. Tonalism that was a specific contribution of Venetian painters to the Renaissance innovations. A rapt silence and a feeling of enigmatic suspension of time dominate the scene thanks to the highly calibrated and strictly symmetrical composition. Everything is a mirror image with respect to the central axis created by the egg and the lamp: from the architectural decorations to the acanthus scrolls of the half-dome; from the holy women, who look like sisters, both carrying the palm of martyrdom, to Saints Peter and Jerome holding similarly dilated books. And it is precisely to these tiny differences that the painter entrusts the deep meaning of the ‘holy conversation’. Jerome, who is deeply involved in the reading of a book in spite of the revelation of the mystery he is witnessing, is the emblem of contemplative life. Two slightly-shaking poplars, one dried up and the other full-green, witness how Holy Scriptures can be vivified by studying. Peter holding both the traditional keys and a closed book is a clear symbol of absolute wisdom and is representing the Militant Church. The fig tree and the ivy behind him are two allegories of the cross which, like the fig tree, provides mankind with its fruit and gives nourishment to the faithful. Also Baby Jesus, holding his leg up, refers to the risen Christ. All this is confirmed by the ostrich egg: a symbol of Easter and recalling the re-birth. Considering all the elements described previously, the altarpiece ratifies Peter’s supreme role and active choice among the institutions and expresses the precise intention of the commissioner of the work, namely the patrician nuns at St. Zachary. It is not a chance that they had Saints Catherine and Lucia, both wise virgins, inserted into the painting and both acting as examples for the young boarder girls hosted at the convent.