The altarpiece by Giovanni Bellini 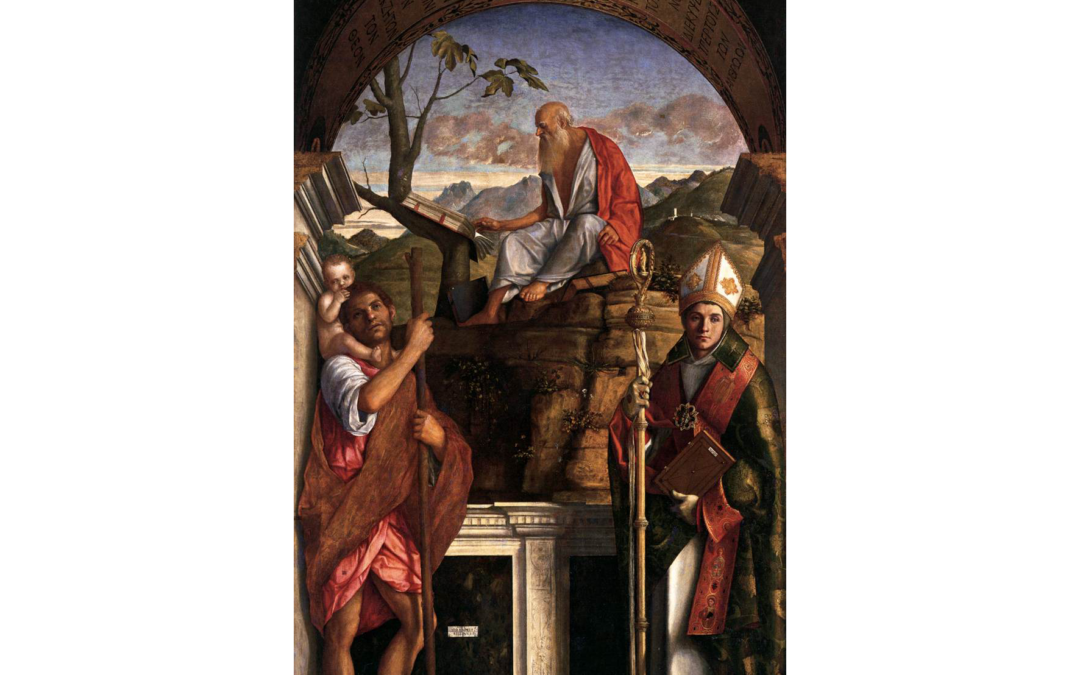 The Altarpiece by Bellini is located in the chapel to the right, which is dedicated to sculptors and wood carvers. When the painter finished the picture, he was rather elderly and almost near to death, which will occur three years later. The commission for this work dated back to almost twenty years before, to 1494 actually, and was by a rich merchant (called Giorgio Diletti) that had passed away in 1503 and therefore did not seen the work finished. Consequently Bellini found himself in a condition that is ideal for any artist: he was completely free from any interference as well as totally independent in any choice he made concerning the iconography of the picture.

So he took full advantage of this situation and he even dared change one of the protagonists of this ‘sacred conversation’. In fact in his will Diletti had requested the presence of the following saints ‘Jeronimi, Ludovici et Chrisostomi’ (that is Jerome, Ludovico and Chrysostom), but the latter is replaced by St Christopher in the picture. In addition, Bellini took some other liberties: for example, St Gerome is not shown with his traditional iconographic attributes and is wearing a white robe with a red cloak, which were traditionally painted as attributes of St John the Baptist.

Moreover the painting stands out for its originality also regarding its composition and demonstrates how the old master was still capable of innovation as well as still able to outsmart younger painters who were on the Venetian art scene. Durer, during his visit to Venice that took place in 1506, wrote these words referring to Bellini: ‘He is very old but he is still the best’. St Gerome is placed on the top of a rock and in a position that is above the other saints from whom he is separated by a marble balustrade. He is also in a pyramid-shaped position, which underlines his superiority.

In the space in front of the balustrade we can see St Christopher on the left and St Ludovico of Toulouse on the right. St Christopher has got his traditional stick and is carrying little Child Jesus on his shoulders, while St Ludovico of Toulouse is wearing bishop’ s clothes, is carrying a crosier and is holding a book written by St Augustine in one hand. A mighty arch covered in a golden-tiled mosaic and having an inscription in Greek frames the saints. This is an open homage to the Byzantine world in line with the titling of the church as well as with the main features belonging to the Venetian culture following the fall of Constantinople in 1453.

The scene can be explained as a celebration of contemplative life-which is particularly represented by Gerome that is placed on a superior level — and almost in another dimension — as well as of active life — embodied by Christopher, who is the symbol of the apostolate of the simple, together with Ludovico, who is the emblem of the institutional work carried out by churchmen.

This dialectical relationship between contemplative life and active life was a topical issue at the time and the subject of debate among intellectuals and theologians. Gerome represents the highest spiritual perfection, which can be reached outside the human consortium through solitude and study. This ‘condition’ is reserved to a small number of ‘chosen ones’.

Furthermore the fig tree the book he is reading is placed on is an allusion to mediation between good and evil. In fact the fig tree also recalls the Garden of Eden. Geromes figure stands out against a gorgeous backdrop of Mountains having a sky of extraordinary intensity as well as brightness.

The noble face of the saint is perhaps a self-portrait of the elderly master, who signed his extreme masterpiece and the last one to be placed on an altar in Venice: a wonderful combination of tradition and innovation as well as painted with the usual sublime mastery of expressive means. Particularly significant is the fact that Vasari, in his work ‘Vite’ (Lives) in 1550, had attributed the painting to Giorgione and then, in the next edition, to Sebastiano del Piombo: in short, to the two most promising personalities that had appeared in the limelight of the Venetian art scene.