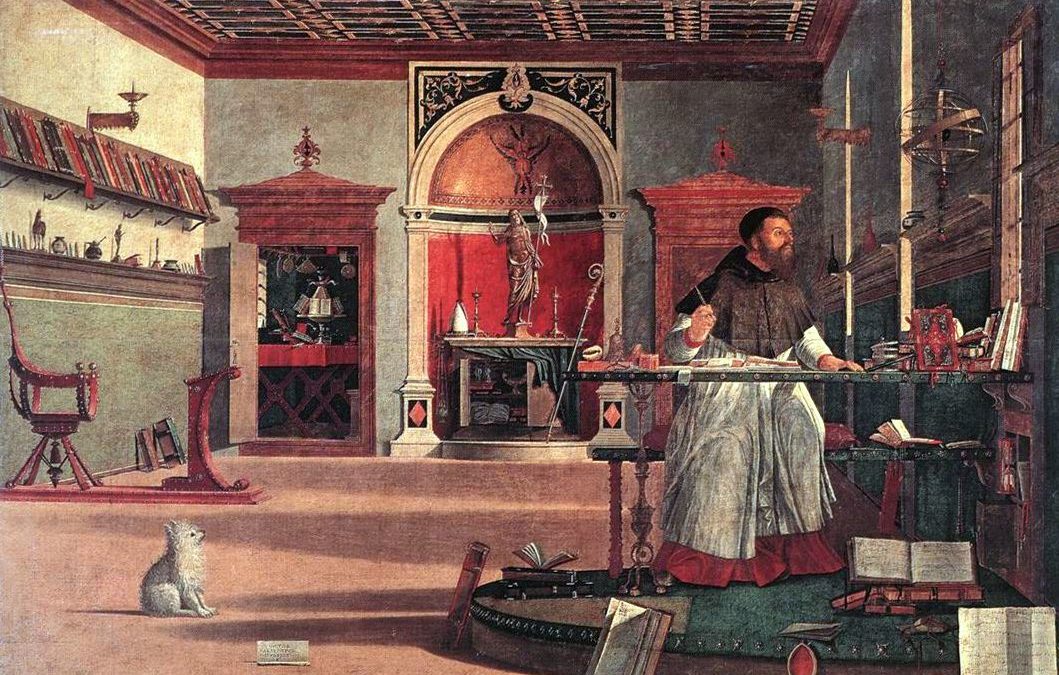 Contrary to the series about St George, inspired by war and fight, the ones concerning St Jerome are about appeasement. The series is inspired by another famous book of the period ‘Life, Miracles and Transit of the Most Blessed St. Jerome’. St Jerome, in one of the most vivacious and amusing scenes of the series, welcomes into his monastery a wounded lion in order to look after him while his fellow monks are running away scared and their white and blue habits are blown by the wind and the rush of the stampede. Some long-bearded Ottomans can be seen in the background living in complete harmony with the monks, a symbol of renewed pacification.
The following canvass, called ‘St Augustine’s Vision, is the peak of Carpaccio’s art. It is said that, while St Augustine was writing a letter to St Jerome regarding a theological matter, he was interrupted by a bright light as well as St Jerome’ s voice telling him that he had died in that very moment. Carpaccio depicts with supreme ability and great detail the study of a Humanistic scholar. He lingers on the numerous objects scattered around the small space. He paints books, an astrolabe, some liturgical décor and a statuette showing Venus, which provided the picture with a symbolical meaning the newly found harmony between sacred and profane studies. The Flemish influence is self-evident and absorbed by the painter through the influence of Antonello from Messina. The peculiar choice of the episode is a smart solution to the need to insert into the series a celebratory portrait. In fact St Augustine is the portrait of Bishop Angelo Leonino who was in Venice in that period as the Pope’s legate, being protector of the Scuola, physician as well as Bachelor of Arts. But he was most of all the main protagonist of the negotiation between the Pope and Venice which ended up with the extraordinary victory on the Turks we mentioned earlier.
Following a scene depicting St Jerome’s funeral, the series is completed by the one dedicated to St Tryphon standing on the right side of the altar. The saintly boy, famous for his ability as an exorcist, patron saint of Cattaro in Dalmatia, is shown while he is freeing Roman emperor Gordiano’s daughter from evil. This is probably the weakest and last canvass of the series and was probably finished by an apprentice of his between 1507 and 1508. In fact Carpaccio was called to the most prestigious task of decorating Palazzo Ducale, following the death of Gentile Bellini.