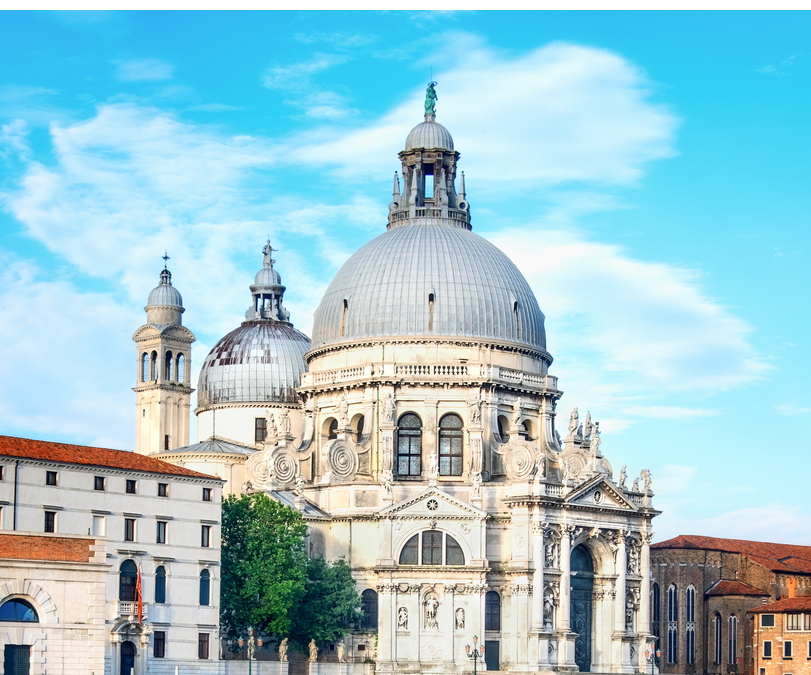 Santa Maria della Salute’s church, a masterpiece of Baroque architecture, stands out from the Venetian skyline. It rests almost at the end of the narrow strip of land of Punta della Dogana, at the farther limit of the Grand Canal before its outlet into St. Marco’s lagoon.
A tourist, floating either in a gondola or on a ferryboat along the Grand Canal, finds his sight drawn by the building with its light and shade effects as well as by the crown-like white dome, a reminder of the 12-star crown of the Immaculate to whom the church is consecrated.

Baldassarre Longhena, the young architect who was the author of the project, received the task directly from the Venetian Senate, which had vowed to have a huge church built in honour of Virgin Mary while a terrible plague was ravaging Venice between 1630 and 1631 and during which 682.000 people died.

Longhena conceived a centre-plan building, an absolute novelty in Venice, in order to ennoble its architecture and emphasise its dedication to the Virgin Mary who appears both on the gable, as Regina Coeli, and on top of the lantern.

On the latter, as Immaculate, has her statue surrounded by 8 stone pillars, displays a 12-star crown, according to St John’s description in the book of Revelation, and holds a rod which is a curious feature but identifies her as “Capitano da Mar “, which was the highest military position of the Venetian Republic.

In this way, she displays a double role: religious and spiritual as well as political and temporal and stands as the Protector of the Venetian Sea Republic. We must also remember that, while the church was being built, the Ottomans had conquered Crete in 1669. The Venetians on the other hand had re-taken part of Greece (consequently, the allegorical decorations might hint at the peculiar historical period Venice was going through in those years).