The Presentation of the Virgin Mary by Tintoretto 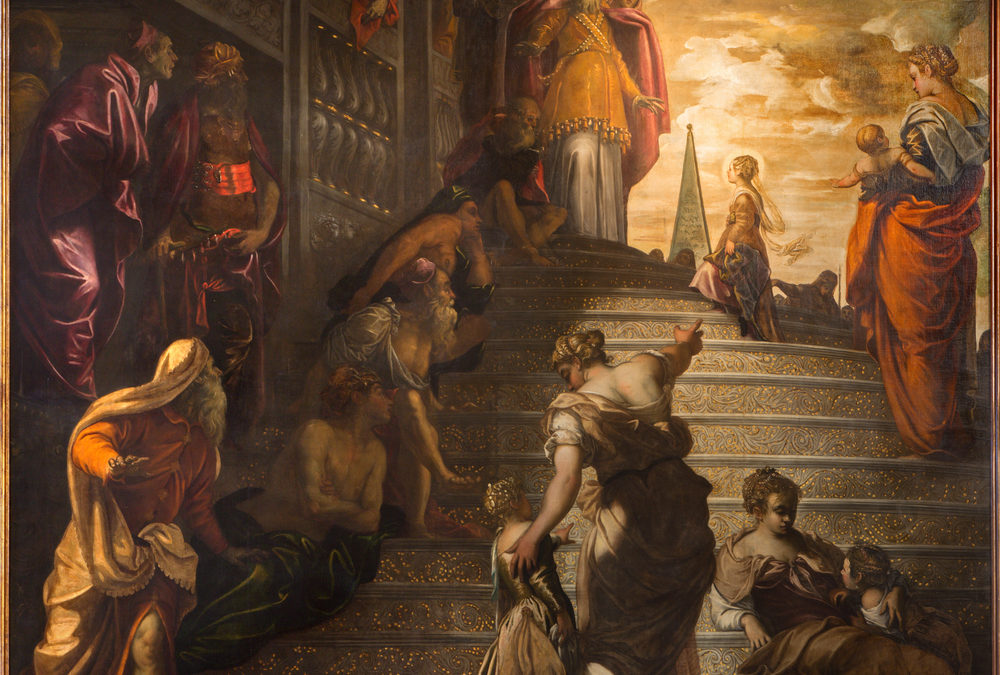 Walking further along the very same aisle, we come across one of the earliest masterpieces by Jacopo Tintoretto. He was so fond of this church, living in the vicinity, that he was buried here in 1594 inside the very same chapel that hosts his beloved daughter Marietta, his Father-in-law Marco de Vescovi as well as his son and his apprentice Domenico. The painting is entitled The Presentation of the Virgin Mary at the Temple and was made between 1548 and 1551. The work was initially conceived as the external part of the XVI century organ’s hatch. The organ was later split into parts. The two paintings, ‘The Beheading of St Paul’ and ‘The Apparition of the Cross to St Peter’ are by Tintoretto as well and are now placed in the chancel. They originally belonged to the organ’s structure as inner hatches. Tintoretto planned a complex scenic design for the Presentation. It is characterised by a daring diagonal as well as very steep staircase having rounded steps along which a tender and very young Mary is clambering up towards the priest, who is waiting for her at the top of it. The steps, decorated with golden twigs, are 15 which is the number of the Psalms. Mothers with their kids, ragged beggars and other characters bear witness to the scene crowding up along the stairs as well as being light up by a clear light which falls diagonally accentuating the scene’s theatricality. In the background we can see a sky crossed by clouds which recall the staircase’s golden and grey colours. The painting is a dashing example of the first part of the painter’s production and he already masters the characteristics which will make him famous: the dizzying perspective angles, the darting light, the creation of the scene following diagonal lines. In the painting the forms still retain a Michelangelo-like plasticity which will fade later on. At the same time the colours are not so much contrasting yet and the light and shade not as stressed as in the later production.