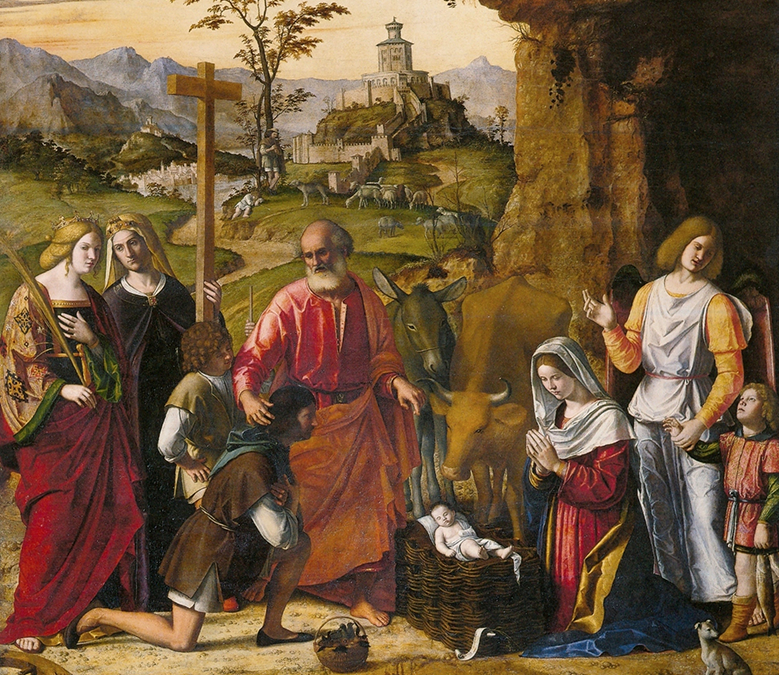 The second altar in the nave on the right houses a fantastic Nativity by Cima da Conegliano, created from 1509 to 1511.
Giovanni Caibo, the patron who commissioned the work, died in 1509 and is buried at the foot of the altar.

In the painting, Saint Joseph is presenting him to the Virgin and the Baby Jesus. Tobias with his symbol, the fish, stands behind the Virgin with the archangel Raphael, while on the left Saint Catherine and Saint Helena are talking to each other. Saint Helena holds a cross that draws the viewer’s eye to the beautiful landscape in the background, dominated by a turreted fortress in the Treviso highlands, a common motif in the artist’s work.

Cima da Conegliano was born circa 1460 and begin working in Venice in 1486. He took his cues from many different artists during his training, including Giovanni Bellini, Bartolomeo Vivarini, Vittore Carpaccio, and Giorgione. Cima specialized in creating altarpieces and other sacred objects in a tranquil and soothing style that was especially popular among those—confraternities, monastic orders—who did not look favorably upon Bellini’s experimental tendencies.

When Gentile Bellini summoned his brother Giovanni and other top artists to work on the Doge’s Palace, Cima was left to dominate the market and even took over some commissions. He deviated little from classic tropes and was faithful to neo-Hellenic classicism, but he did pay close attention to new trends in painting inspired by Giorgione and Titian — the dark, velvety cave and the expansive landscape are evidence of that influence. The Cima da Conegliano painting at the Chiesa dei Carmini is one of his best and is perfectly preserved.