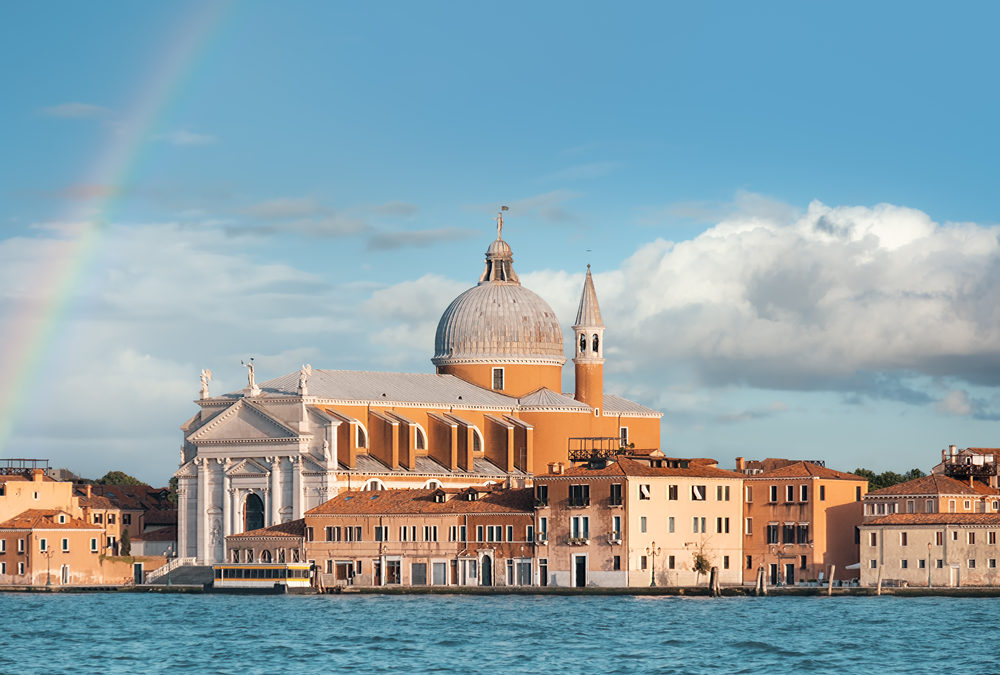 The construction of a third floor of the façade, corresponding to the lateral wings of the buttresses, tends to absorb the excessive shift in size between nave and chapels, difference that would inevitably have been propelled towards the outside of the church. Yet the façade at the Redeemer’s has a role that is deeply linked to the space concept of the building stating that the church is for sure a building developed in length but it is conceived as a virtually centric building, in accordance with the traditional shape of a votive church. This is proved by the attic that frames the pediment as well as by the flattening perspective of the pitch of the roof that seems to create a second fronton (which is a feature clearly inspired to the Pantheon); not to mention the very role that the façade has compared to the entire volume of the building, as we can see in a front view from the opposite bank of the Giudecca Canal. The very same view one can enjoy axially every year walking along the bridge of votive boats built across the canal the third Saturday in July. The feast of the Redeemer is one of the most heartfelt and intensely enjoyed festivities in Venice. In fact the Venetians cram (with boats) St Mark’s basin as well as the Giudecca Canal with boats in the night between Saturday and Sunday, when a spectacle of fireworks becomes the highlight of the festival. From any position along the bridge of boats, which is crossed by the town people in a procession following the Patriarch of Venice, the façade of the Redeemer looks like the façade of a centralised building dominated, as it is, by its massive dome framed by two bell towers. The Redeemer’s façade thus becomes a complex machine, where the projection system used to adequately solve the problem of the different height of the naves, according to the principles of the ‘old style’, is developed to reveal from afar the true nature of the building. Although he had been pushed out from the two most important centres in Venice (Rialto, the financial one, and St Mark, the political one), Palladio managed anyway to influence heavily the image of the city from afar: he built some focal points of a backdrop that had St Mark’s little square as its ideal stage. But its territorial sensibility and his ability to design simultaneously at different scales allowed Palladio to integrate the Redeemer with the partially made project for San Giorgio Maggiore (Greater St George’s) and into a scenic system that was not to be seen from a single static viewpoint in-between the two columns of St Mark’s, but instead from the infinite possible viewpoints of the galleys that docked in the basin of St Mark. Therefore a scenic backdrop designed to be observed in motion, not only by the inhabitants of Venice but also by the pilgrims, by the merchants as well as by the rulers who disembarked from their ships. That was a very Venetian way to propose a universal architecture. 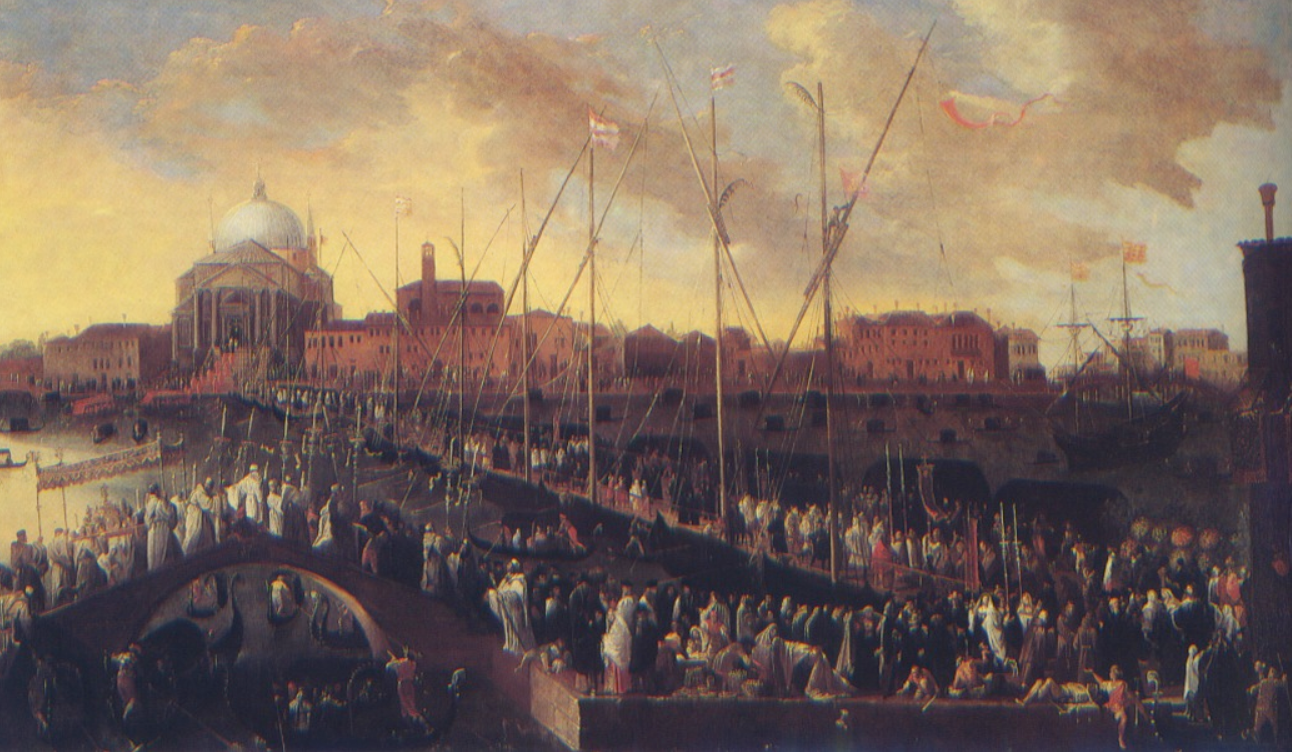 The construction of the Church was decided by the Venetian Senate as vow made in on the occasion of the plague that that ravaged Venice between 1576 and 1577, plague during which Titian died. The choice of the location as well as the church’ s shape were the subject of a competition and of a broad debate between September 1576 and February 1577, when the project by Andrea Palladio was finally approved. The church, whose building was financed by the Venetian state, was located along the Giudecca Canal, which meant it was given a visibility proportionate to the financial expenditure, as well as being consistent with its role of votive church. The project Palladio initially conceived was probably for a concentric building and it must have aroused doubts, as he immediately after was asked to draft two new projects: one for a round church building and one for a quadrangular one. Each of them as an expression of the two parties in which the Venetian nobility had split over the matter. The final decision to accept the latter model was undoubtedly due to the need to have a building large enough to accommodate the faithful as well as the Doge’ s cortège with the magistrates and the choir of monks, but also to new provisions issued after the Council of Trent concerning the preference for longitudinal churches that were also inserted by Charles Borromeo into his ‘Istructiones’ (Instructions) in 1577, a sort of handbook for the design of churches in accordance with the rules of the Counter Reformation. In any case the church that was built between May 1577 and September 1592 expressed in each of its aspects a composition of both concentric and longitudinal elements, a sort of compromise, indeed a synthesis, of the views of the two contrasting groups of patricians who governed Venice. The façade of the church, elevated on a high podium, was conceived, like the one Palladio made for the church of San Francesco della Vigna, as an intersection of a higher order and a lower order, imagined like virtual porticoes of ancient temples projected and ‘squashed’ on the surface of the façade.